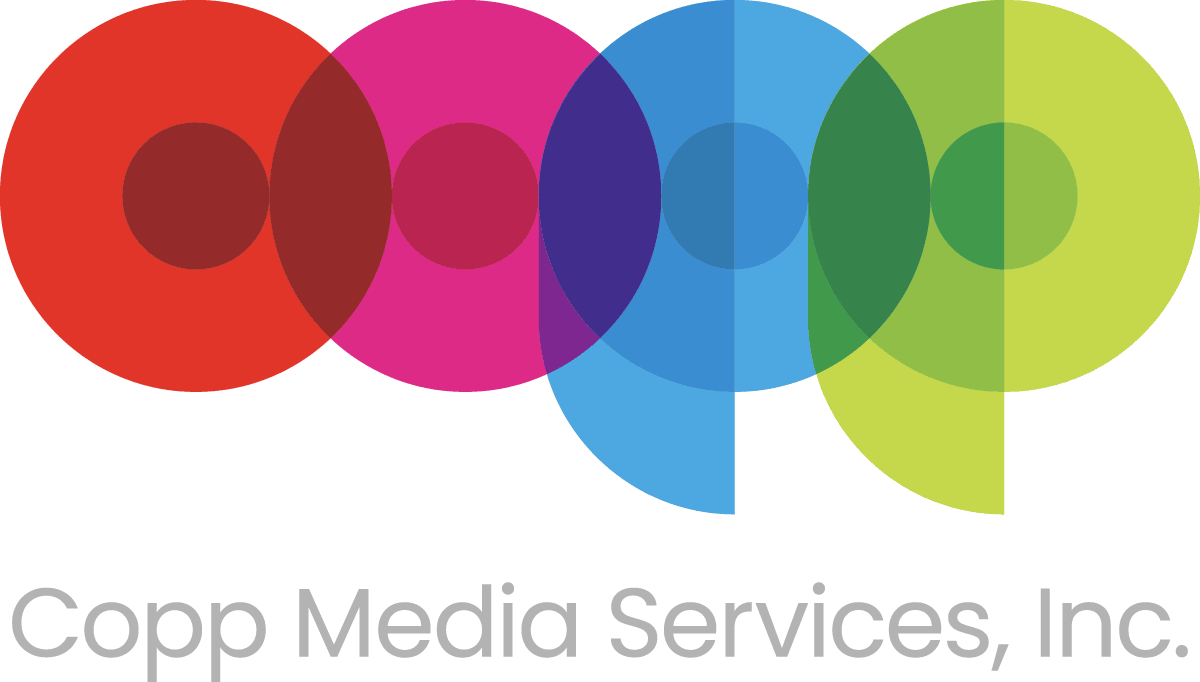 Copp Media Celebrates 30 Years in Business – What has Changed? 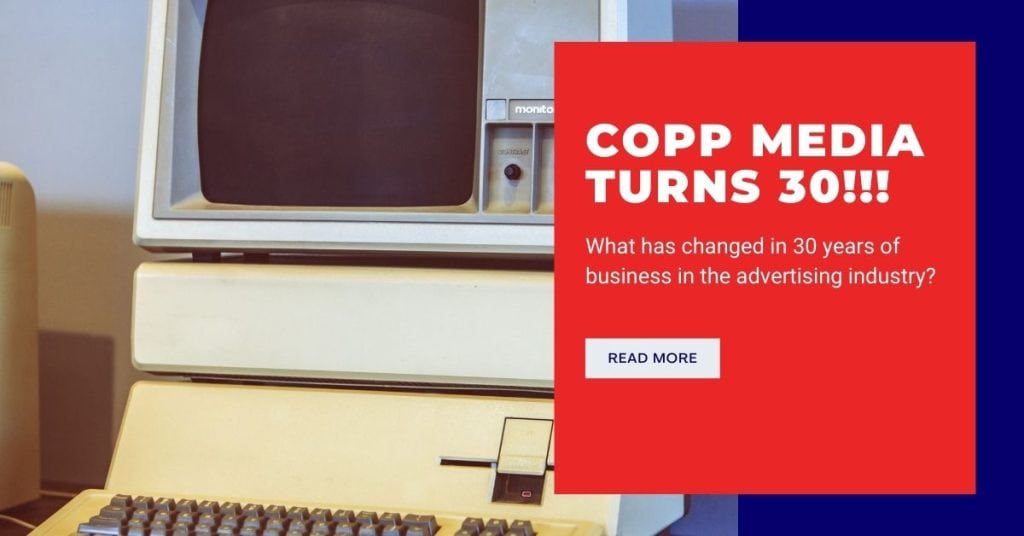 It seems amazing that beginning December 2021 was the start of our 30th year in businesses.   To say things have changed would be an understatement!   In this blog, we are going to walk you through some of the major changes and provide a comparison of how we — and technology — have changed our business.   And, we will talk about things that haven’t changed!

Radio changes during the past 30 years

When we started Copp Media Services in 1992 we were already eight years into a historic change of the FCC lifting restrictions on how many stations (and what share of the market’s listening) could be owned under one company.  In the early 90’s radio stations were a hot commodity, and many groups were offering the purchase of all of their stations within their portfolio at a “combined” rate.  The total number of broadcast radio stations licensed by the FCC as of September 1992 was 11,275.  As of September 30, 2020, the total number of radio stations is 15,460.  In addition to the growth of radio stations during our 30 year history, terrestrial radio has added competition for audiences with satellite, digital and Apps such as Pandora, Spotify to name a few.  Podcasts continue to grow in popularity, and we see this medium becoming more important to some of our client’s success.

Fragmentation of the radio listeners has led to lower spot rates on most traditional radio stations, which deliver fewer radio listeners.   However, we see benefits of local radio.   The ability to run local promotions, sponsorships of local events, and on-air personality endorsements and attendance at events, all provide something that their competitors cannot.   While Copp Media purchases all radio formats including Pandora and Spotify, we see the value that local radio plays within a community.   Terrestrial radio stations still deliver more people today than other mediums such as Pandora and Spotify.

Television continues to play an important role in media plans

Television remains a reach medium but there is also fragmentation of audience levels.   In the 90’s, if a television station has a prime-time program that had a 6 rating (delivering 6% of the population), that program would not be considered a success and would never make it to another season.   Today, a 6 rating is a high rating for prime-time programming.   Cable television was a new player in the market in the 1990s, and the “network” stations ABC, CBS and NBC received the largest share of any television media buy that was made.   Today, not only do we have Cable networks, but independent stations.  Television is still bought and sold using audience estimates, but they themselves have become less reliable.   Programs are recorded and watched later, viewers many times will fast forward through commercial inventory.   The Disney+ and Apple TV+ and HBO Max and Peacock apps, as well as the shrinking number of households with cable or satellite subscriptions are all contributing to the decline.   A popular phrase “cord-cutting” and “streaming” are the continuing trend.   Networks have adapted to the streaming, as have their viewers, who are now used to have full season of shows to watch at any time.   Binge watching was not a “thing” in the 1990s.

We still believe local television stations have a place on media buys.  We look for opportunities such as live event programming, things that typically don’t get recorded.  This list would include awards shows, sporting events, etc. Below is an example the ratings of live sporting event viewing over the years for the Super Bowl. 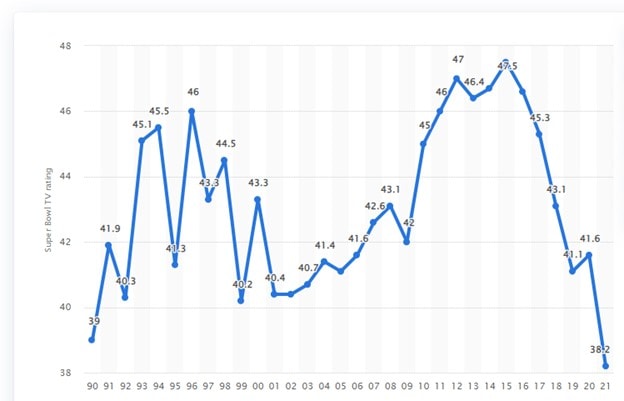 Television is still “bought” and “sold” using the same measurement tool.   Nielsen was the company which measured television viewing in the 90s, and still is measuring today.   Another player in this arena is comScore, which uses set boxes on television sets to determine viewing within households.   Both “measurement” companies have pluses and minuses.   Copp Media Services uses Nielsen ratings for estimating viewing for clients.

“Back in the Day” there was only static billboards in two sizes.   Poster billboards (12 x 24) and Permanent billboards (14 x 48).   The poster billboards were sold a month at a time, and the Permanent (often called Painted Bulletins) locations were sold on longer term contracts.  Poster billboards were printed on paper (think of wall paper) in eight sheets and then applied to the poster billboard.     There were no “vinyl” coverings as we see today. The 14 x 48 billboard face was removed from the structure, and the art was painted on the face of the board and then re-installed.   The Wichita Ballet commissioned an artist (Rachel Kice) to create and paint a billboard to promote the Ballet, and this is much like what would happen in the shop at an outdoor billboard company.   As a note, we have several of Rachel Kice’s paintings in our offices and she is one of our favored artists.

Other out-of-home opportunities included sides of buildings, buses, and subways.   Each of these are still prevalent today.  The addition of digital billboards has opened a new set of benefits for those companies who use outdoor.   The ability to change messaging often and make current almost immediately, is a wonderful strategy that can be implemented.   The measurement of outdoor has also evolved from the number of daily traffic counts (DEC) to Weekly impressions and “eyes-on” data that account for the visibility of the board as well as traffic.

Newspaper has experienced some of the greatest changes

The digital revolution has probably had the greatest impact on this medium.   The way individuals consume information is day and night different from the 1990s to today.   According to Pew Research, the weekday subscriber base was estimated at 60,164,000 to 24,299,333 in 2020 (60% decrease).   However, we continue to see newspaper’s online readership continues to grow.   As a company, we believe that newspapers are an important part of every community and provide a service that is critical to each of us.

As an agency, we still see the benefits of the printed paper for some clients.   However, one major benefit to newspaper was always its “catalog value” – a place where consumers would go to find products and pricing.   Tradition was to see grocery ads on Wednesdays, Black Friday deals on Thanksgiving Day, Help Wanted Ads in the Saturday and Sunday edition of the newspaper and Business Section focus on a specific day of the week.   Those benefits are no longer there with the printed (or online version) which we believe has hurt this medium as an industry.

Newspaper ads today are sent digitally, but in 1992 the words were sent out to a typesetter and then a velox was ordered to send to the newspaper.  Almost all newspapers worked with a Standard Advertising Unit (SAU), so that their columns were standard sizes, making it easy for companies to run ads in multiple newspapers without making creative changes.  Previous issues of newspapers were stored on Microfilm.   If you want to research a newspaper article or column, you could go to the library and sort through hours of microfilm.

Every element of the business has been impacted by technology.   With each new technology, there has been resistance.   The first computer that Copp Media has was a IBM 286.   In fact, it was thought that that would be the biggest computer anyone would ever need.

Kind of clunky, right?   And the printers.   The printers had perforated paper that ran through and fax machines used paper that disintegrated over time.

Much of our research was done at the Public Library, and dial-up internet was just making its appearance in the early 90s.  The World Wide Web was non-existent, and it wasn’t until the launch of the Mosaic browser in 1993 that opened the web to a new audience.   People started to discover how easy it was to create their own HTML web pages.   The number of websites grew from 130 in that year to over 100,000 at the start of 1996.   Today there are an estimated 1.86 Billion (with a B) active websites today.

Technology has provided the industry with better measurement, additional media platforms and ways to reach the consumer.   Digital strategies are a major part of our media plans, and we are always looking to be inventive with out of the box strategies that will give our clients a competitive advantage.

What hasn’t changed?  Core Values of our Company

In 1992 the core values that were defined have been followed throughout our company history.   Doing the right thing for clients, being honest, treating their advertising dollars as if it were our own, providing our customers with sound advice and strategies.

While changes are hard, we are proud of our journey of where we started and what we have become.   We continue to be customer focused and believe this to be a major part of our continued success.   Our mission is to continually evolve and to be leaders within our industry.   Our journey is marked with caring for others within our community, and being able to give back not only monetarily, but with our time and talent to provide help where it will make a lasting difference.   We are grateful to our clients for letting us work with their companies, trusting us to do the right thing.   Thank you. 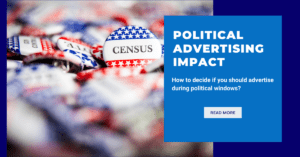 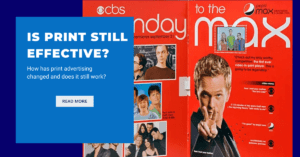 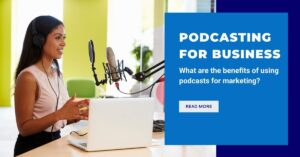